What is a truffle

A truffle is the spore-bearing fruit of a fungus. The actual fungal organism is a perennial network of underground mycelium (fungal filaments dispersed in the soil). Unlike mushrooms, truffles develop entirely underground. Whereas mushrooms typically disperse their spores in the wind, truffles need the help of animals to spread their spores. Most truffles are consumed by forest animals that dig them up for food. It is no surprise that truffles have evolved to emit aromas that appeal to animals, often including humans. When mature, truffles produce these odor signals to effectively say ‘eat me’! The aromas develop only when at least some spores are mature, then intensify as more and more spores mature. Thus an animal is not likely to detect a specimen before many of its spores are ready, and it is not likely to miss a specimen in which all the spores are ready.

Truffle spores pass through the digestive system unharmed and are deposited in feces to germinate and form new fungal colonies, often great distances away from their parent. As a food source, they are an important part of forest ecosystems; some small mammals (such as certain voles) subsist almost entirely on truffles.

One defining characteristic of truffle-forming fungi is that nearly all form symbiotic relationships with plants. This is a mutually beneficial partnership in which the fungal mycelium and the root cells of the plant grow together creating special structures with the roots called mycorrhizae (from Greek, myco = fungus and rhiza = root). The plant shares the sugars it creates by photosynthesis with the fungus, and the fungus assists the tree roots to take up water, minerals, and other nutrients from the soil. The fungal mycelia are much more efficient than unaided tree roots at foraging for nutrients; as much as 100 meters of fungal hyphae (microscopic filaments of fungal cells) can be found in a single teaspoon of healthy forest soil!

This symbiotic relationship is so important that very few tree species can grow without their mycorrhizal fungi associates; many forest tree nurseries now intentionally inoculate seedlings that will be used in reforestation with mycorrhizal fungi. There are varying degrees of specificity in this symbiotic relationship; truffles are always found in association with particular plants, sometimes with only a single species of tree. Likewise, different trees have varying numbers of fungi with which they will form mycorrhizae.

In parts of Europe, the term truffle is used to refer to only certain kinds of below ground-fruiting fungi, sometimes only to species that are commercially harvested.

History of the Truffle 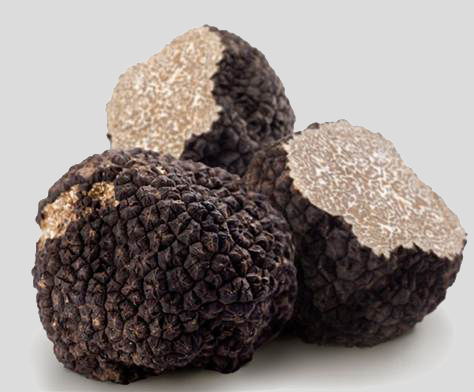 istory of the TruffleEgyptian, Greek and Roman literature all contain references to truffles in one form or another. Truffles have graced the tables of kings, tyrants and noblemen for centuries.

After the fall of the Roman Empire, the Medieval Catholic church largely banned the harvesting and consumption of the “devils fruit” and it fell out of popularity. Not until the 16th Century did the truffle once again begin to appear on banquet tables. During this Renaissance period, the Italian Catherine de’ Medici is known to have first brought the delicacy to her new French King, and one hundred years late Louis XIV readily enjoyed them in his court.

Brillat-Savarin noted that the popularity, and supply, of truffles reached its height in the 19th Century. At that time, it was not fully understood how truffles grew and therefore they could only be found and harvested in nature. However, merchants aware of their popularity stimulated the market by paying high prices, and used the fastest transport available to bring them to Paris, which was the central truffle marketplace of the time.

With a ready market came a desire to increase supply, and attention focused on artificial and systematic cultivation. Early steps toward this goal were trial and error, and (as is today) great secrecy surrounded the experiments. However, Gasped Chatin records a significant increase in truffle production between 1860 and 1890, which may indicate some success in cultivation. It is estimated that at the turn of the 19th century over 500 tons of Black Truffles were being harvested annually from France and Italy.

Today, while difficult to approximate the exact total production level given the historically fragmented, secretive and cash nature of the industry, it has been estimated that only 20 to 30 tons of Black Truffles are produced annually worldwide. Although there is some controversy surrounding the current worldwide production level, Piedmont Valley Truffles forecasts a true total market size of up to 80 tons per year – of which 30 to 40% are farm cultivated.

This decrease in production throughout the 20th century was greatly attributed to the increased harvesting of natural truffles with little direct cultivation, coupled with deforestation and forgotten traditions.

In the mid 1970’s the first infected plants with Black Truffles were raised under controlled conditions in France and Italy; and the first truffles were harvested from these trees in 1977. This initial discovery began the continued upward movement of worldwide truffle production and spurred the early phases of a new industry.

There are likely over 200 truffle installations planted in the US ranging in size from a few trees to over 12,000 in one orchard. These trees have been supplied by several trusted sources across the United States. Several orchards are already in production.

After much trial and error the first crop of truffle was reportedly harvested in Northern California in the 1980s followed in the 1990s from orchards in North Carolina.

Several nurseries are now well established and selling the young seedlings. The demand for truffles themselves has been growing exponentially with the increase in numbers of chefs and other food connoisseurs who are aware of this delicacy being grown in North America. Their popularity is certain to increase as the public awareness of the domestic truffle production and the desire for local foods continues to expand.

Truffles grow underground in a mutually beneficial relationship on the roots of ornamental filbert and certain oak tree species. Because of this, the production of truffles is very different from other mushrooms. Inoculated trees are planted in organized patterns in truffieres, truffle orchards or groves. These orchards are maintained and irrigated for several years until the trees and the fungus have matured sufficiently to begin to produce truffles.

Dogs are scent trained and used to locate the truffles, which are usually 4-6 inches underground. Some members have their own dogs to hunt truffles but several also contract with other handlers to hunt truffles in their orchards.

In 2005 several of the growers, realizing that the exchange of ideas would be beneficial for the whole industry, organized into a non-profit, North American Truffle Growers Association (NATGA). Now in its fifteenth year, the organization has roughly 50 active farms as grower members.

The website for the organization is www.trufflegrowers.com. If you are interested in growing truffles, there are links to several other informative websites.

In the mid 1970’s the first infected plants with Black Truffles were raised under controlled conditions in France and Italy; and the first truffles were harvested from these trees in 1977. This initial discovery began the continued upward movement of worldwide truffle production and spurred the early phases of a new industry.